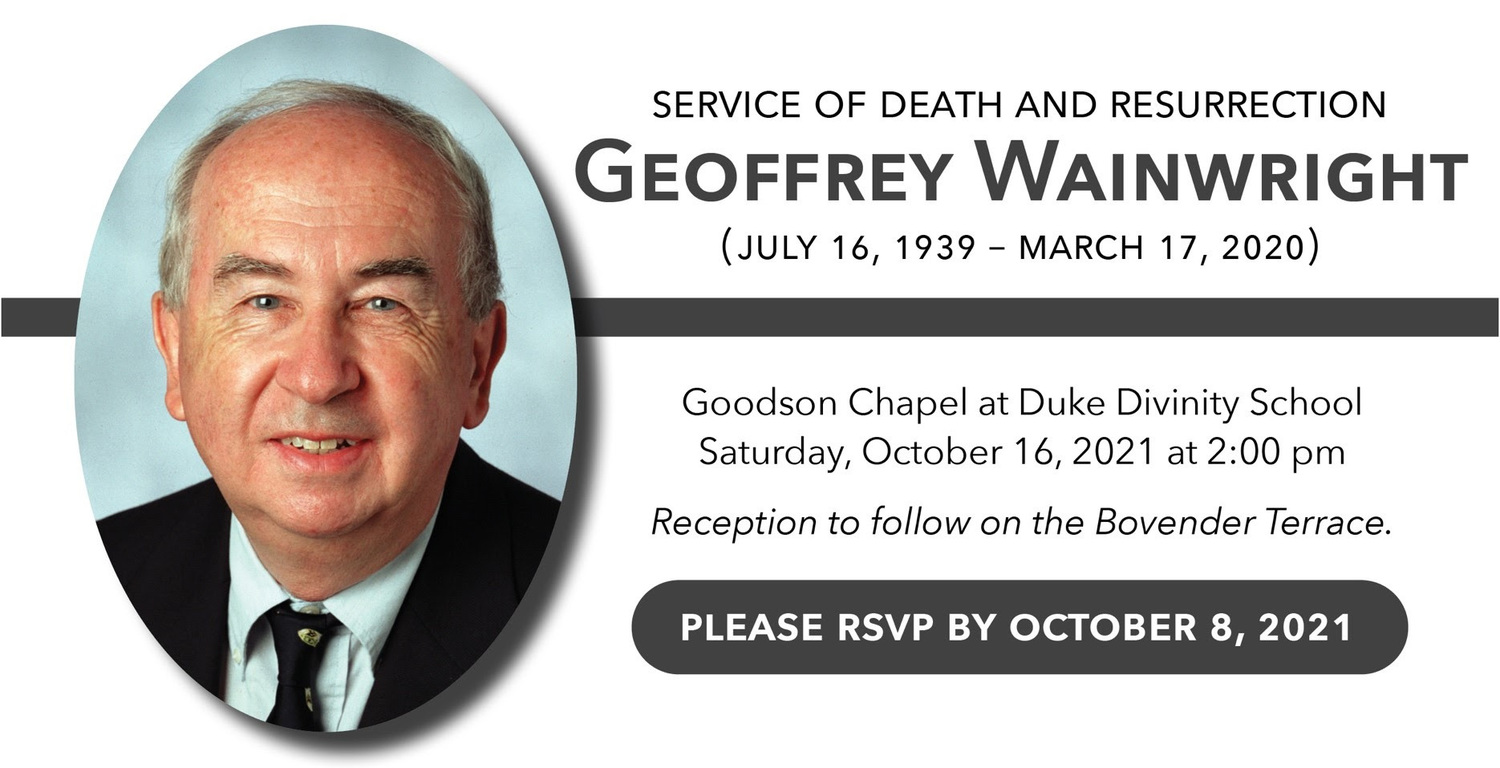 On March 17, 2020, the Methodist Church lost one of its leading ecumenists, Geoffrey Wainwright. For almost three decades, Wainwright formed Christian ministers and theologians at Duke Divinity School for the church universal. In the best of Methodist tradition, Wainwright loved scripture and singing. He exhorted his students to “guard the good treasure” entrusted to us in Scripture and the sound doctrine of the church, “with the help of the Holy Spirit living in us” (2 Tim. 1:13-14). Indeed, he inscribed these verses on the books that he autographed for his students. Wainwright believed that good hymnody helped form sound doctrine. Hence, he frequently invited his students to sing hymns during lectures, especially those by Charles Wesley. Because Wainwright was Methodist, he was ecumenical. He introduced himself to his students as an evangelical, orthodox, catholic theologian, all lowercase letters. His profound doxological vision, linguistic skills, and passion for Christian unity helped him become a world-renowned ecumenist. Geoffrey Wainwright was born in Yorkshire, England, the only child of Willie and Martha Ann Wainwright. At the University of Cambridge, he studied Modern Languages and then Theology. He received a theological doctorate from the University of Geneva in 1972, and his Cambridge D.D. in 1987. He was ordained by the British Methodist Conference in 1967. For six years he served as a pastor and teacher at the Protestant Faculty of Theology in Yaoundé, Cameroon. On returning to Britain in 1973 he taught at The Queen’s College (joint Anglican Methodist) in Birmingham. In 1979 he moved with his wife and three children to the United States where he taught at Union Theological Seminary in New York before moving to Durham in 1983 where he became Professor of Systematic Theology at Duke Divinity School until his retirement in 2012. He was a member (1976-1991) of the Faith and Order Commission of the World Council of Churches. He was a principal editor of the text “Baptism, Eucharist and Ministry” drawn up by the Commission at Lima, Peru in 1982. Between 1986 and 2011 he served as chair on the Methodist side of the Joint Commission for Dialogue between the World Methodist Council and the Roman Catholic Church. Among his books the most influential remain his systematic theology, Doxology: The Praise of God in Worship, Doctrine and Life (OUP 1980), and The Oxford History of Christian Worship, co-edited by Karen Westerfield Tucker. In 1965 he married Margaret Wiles, who survives him as do his children, Joanna Paulman (Lance), Catherine Aravosis, Dominic Wainwright (Jeannie), and his grandchildren, Wesley Paulman, Matthaios, and Sofia Eleni Aravosis. Donations in his memory may be sent to Duke Divinity School (in honor of Geoffrey Wainwright), Box 90968, Duke University, Durham, NC 27708 and will be used to provide financial aid support for students. You may also give online at https://www.gifts.duke.edu/divinity.

CLICK HERE to RSVP for the Service of Death and Resurrection for Geoffrey Wainwright.

Oct 10
Abiding in the Word

Subscribe to receive email updates with the latest news.